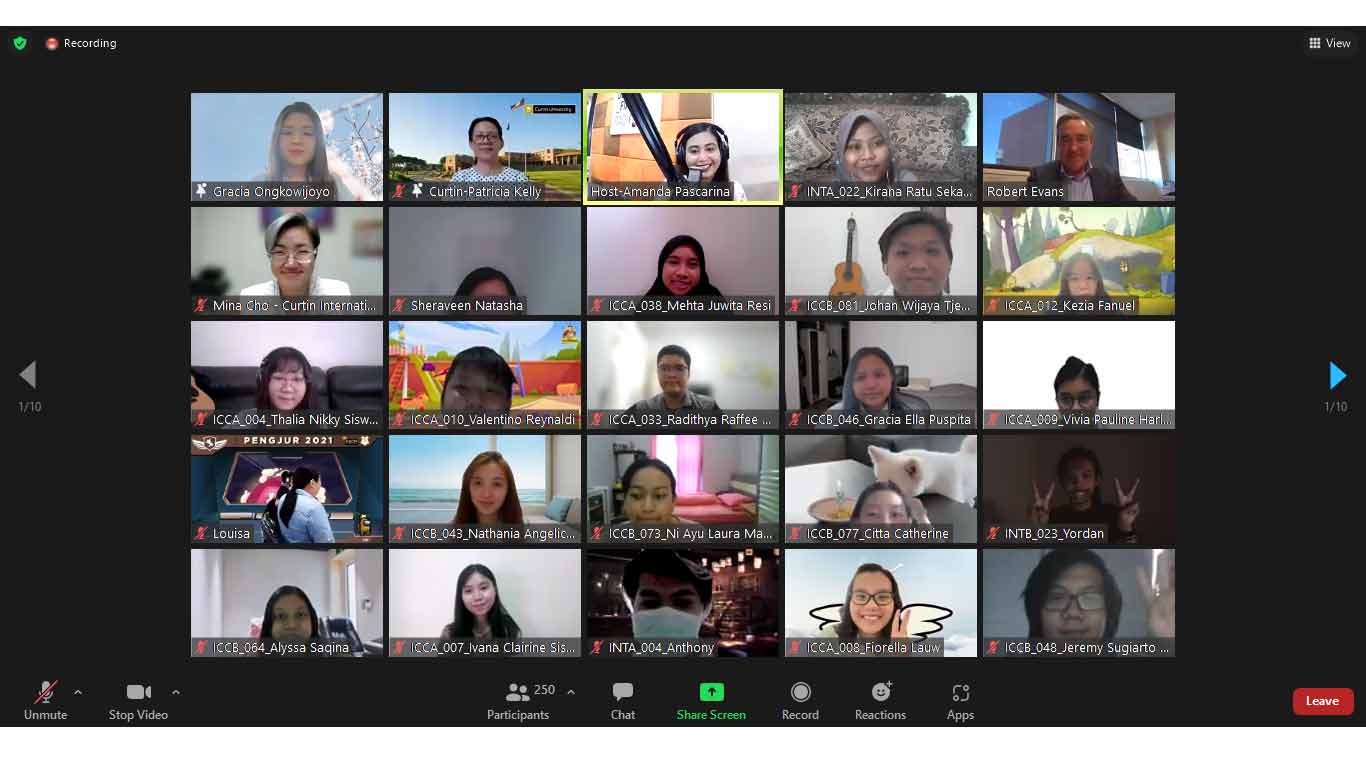 14 October 2021, an important day for Communication Science class students where there were at least three batches of FIKOM Major itself attending the event, including students from batch 2019, 2020, and 2021. The event was held through ZOOM Meeting and a live broadcast from UC’s very own FIKOM Radio and FIKOM’s Youtube Live.

The event was not only for FIKOM students but the event was also available for students from different majors but FIKOM itself has the highest participants because the materials that are delivered by our speakers relates to their course. The host for the event is Ms Patricia Amanda Pascarina, who is also a lecturer from FIKOM major.

The first session is conducted by UC NNP, which is the UC Global Chat. The speakers also came from Curtin University. The event was started by Ms. Amanda at 01.00 PM (Western Indonesia Time).  After that, the event continued by greetings of Head UC NNP (Networking and Partnership), Mrs. Suryani Halim, Head of UC NNP and Ms. Gracia Ongkowijoyo (Vice head of UC’s International Office). After the speeches by both Mrs. Suryani and Ms. Gracia, the stage was passed to our first session speakers, which are Ms. Mina Cho, MBA, Mbus (international Partnership Consultant – Curtin University), and Patricia Kelly (In Country Recruitment Executive Indonesia) 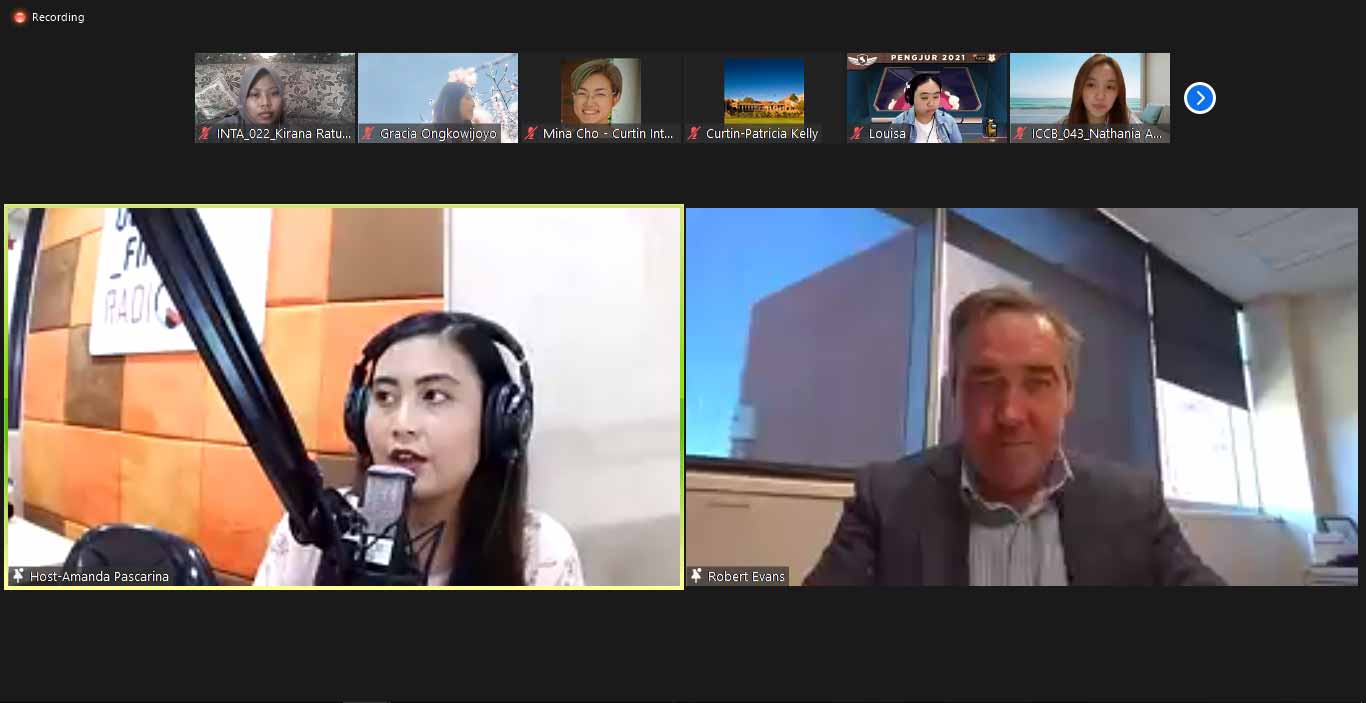 The opening of the guest lecture in the theme of “Leadership and Intercultural Communication” by Ms. Patricia Amanda as the lecture of Faculty Communication Studies.

“So glad to be there with you again, although in a pandemic situation that will be different from the last time I’m going to Ciputra University,” said Ms. Mina in her greetings. She also directly explains and says who she is and what she will give to Ciputra University students. Ms. Mina tells us that Curtin University is the first ranked Business University in Australia. She tells us about the facility and how it feels like studying there. But, it turns out the time to move the main session about the guest class which is guided by the Dean of Curtin University too, Prof. Robert Evan in the main topic of “Leadership and Intercultural Communication”. 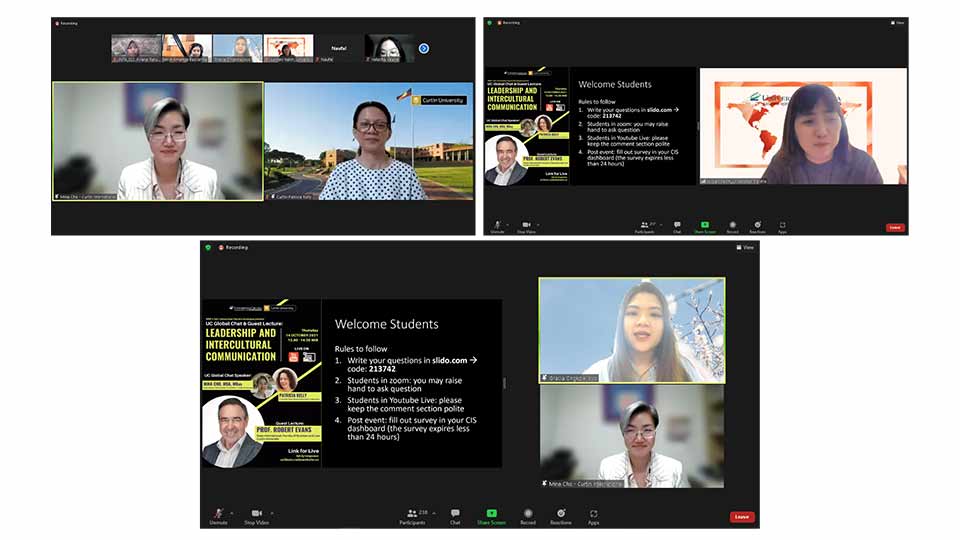 The greeting session of stakeholders among Ciputra University and Curtin University.

The guest lecture’s theme was inspired by the multiculturalism that may be found at any time and in any place. Despite the fact that everyone believes they are in the same location and share the same culture, there will be differences. Because differences aren’t simply about religious culture, but also about regular behavior. “The Hofstede approach states that the social culture that was built in the country is pure selection that generated a new difference, but they have the power to make a positive impact for everyone,” Prof Robert Evan remarked in the first session. He discussed why we must be understanding of others and the consequences of doing so if we wish to integrate with them.

Prof. Robert Evan then goes on to explain how differences cause us to struggle and how to look outside the box. He uses the culture of organization and leadership in Indonesia and Australia as an example. He differentiates and spreads culture between them based on human characteristics (individualism vs collectivism), leadership characteristics, the indulgence of purpose working, the orientation of time work, and how this country resolves ambiguous organizational problems. He discovered a lot of contrasts between them based on this concept. “The Indonesian people are more open and responsible to adopt new cultures, but the one aspect that makes Indonesia the formal one is in organizational communication, which is more rigid, so they prefer to remain mute and follow what the boss says,” Prof. Evan explains.

The problem is when being compared to Australian people, they are typically more  individualistic, but they apply informal organizational communication to make sure every problem or tragedy happens in the office. When there’s an exchange of opinions in a group, there will be rich solutions that will appear if they can be managed well. This also becomes the answer to why Indonesian people take a short time to solve their organizational problems. It is very different with the Australian people who prefer to take a long time to discuss the problem, even if it’s hurtful to say. 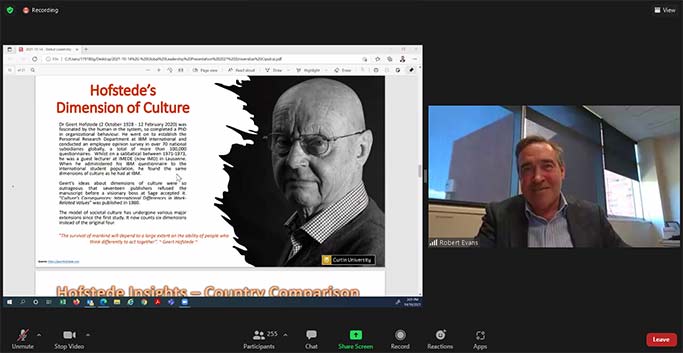 The session of Prof. Robert Evan when explaining Hofstede’s dimension of culture that relates with the condition of organization framework and culture.

Prof. Robert Evan believes that differences will be kept to a minimum if everyone, including themselves, can manage their egos and wish to listen to everything before forming an opinion. Because listening is the means by which everyone may develop tolerance, which will lead to unified and productive intercultural conversation. As a result, Mr. Evan concluded his lesson by quoting Robert Alan, “differences in culture will not separate you, but other cultures will provide you a power to be of value to everyone.”

With that statement, the guest lecture was closed and continued with the question and answer sessions from UC Global Chat session about how to transform study there, student exchange, or double degrees in between Ciputra University and Curtin University bachelor’s degree. This session will be the enclosure of this event led by Patricia Kelly, the delegation of Curtin University who is also in Country Recruitment of Executive Indonesia at 17.00 WIB.

About the Author: Michelle Chandra