Explore Surabaya at Home With Virtual Tour by UCIC

Explore Surabaya at Home With Virtual Tour by UCIC 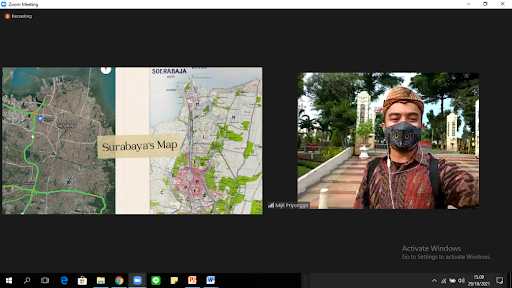 The opening of UCIC Virtual Tour by Mr. Mijil Priyonggo, Cak Surabaya before showing the beautifulness scenery and story behind it (29/10/2021)

Surabaya is a metropolitan city that has a lot of memories to remember. Not only about history, but also about cuisine and everything in the city that has a deep meaning to patriot land. Starting from buildings, bridges, shopping complexes, and worship places, there are a lot of stories that can be studied more to increase awareness about loving self-district and also the sense of tolerance in community life. So with that, NNP in the program of UCIC held the event of the Surabaya Virtual Tour in a zoom meeting that was followed by 80 participants on Friday, October 29th, 2021.

The event was opened by Felicia Yohana and Natasha Valerie at 03.00 PM with the greetings of Mrs. Suryani Halim, as head of NNP, and Ms. Gracia Ongkowijoyo, as head of UCIC. On this occasion, UCIC invited Mr. Mijil Priyonggo, who was Cak Suroboyo, and also Mr. Erik Stenly, S.I.Kom., M.Sc, lecturer of HTB Major at Ciputra University. “Welcome everyone and enjoy our tour at one of Surabaya’s most memorable corners,” Mr. Mijil said. In the opening, he shows the appearance of the monument. Then, he moved to the next destination, the International Building, which was the place for allies based in the colonial era and has become an office right now. The second place is the Cerutu Building, which is located on the seventh floor of Rajawali Street. As history says, this building was a sugar factory  and still keeps the wholeness. Because of that, this building was nominated as the cultural heritage of Surabaya. 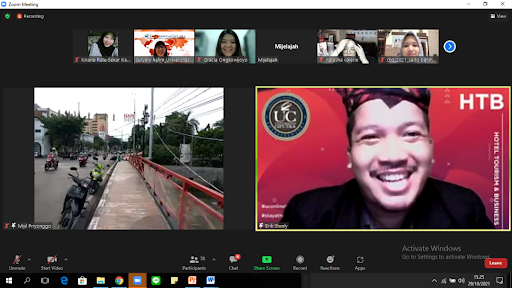 Mr.Stanley, lecture of HTB UC tells about the history of Red Bridge Surabaya

After that, Mr. Mijil invites the participants to enjoy the scenery of the Red Bridge. However, due to the poor network, some of my explanation to him is lost. Because of that, the explanation to be continued by Mr. Stanley is that there is no more reconstruction on this bridge. He also tells us about the next destination, Kya Kya. “Kya Kya” in English was meant as “strolling and walking around” said Mr. Stanley, lecturer of HTB. Then Mr. Mijil was moved to Klenteng in this trade complex, which has unique architecture and also unique toys called “Wayang Potehi or Glove Puppetry.” This puppet is used to tell a Chinese story, like the Wayang Kulit story in Javanese. 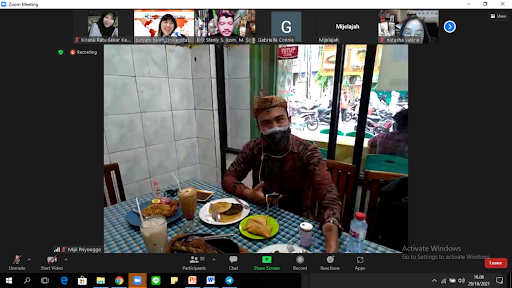 The portrait was taken by Mr.Mijil and crew in Yaman Kuliner to taste the taste of Arabian in an Arabian Village called Ampel.

“After going around the stories of the Netherlands, China, and the last time we go to an Arabian village called Ampel,” Mr.Mijil said at the front gate of the religion tourism location. He tells us about the history of why it became a sacred place for Moslems there. As the name implies, this region was the grave of a guardian god called Sunan Ampel. In this place, there’s an old mosque from the year 600. Besides it, Ampel was well known for its culinary. In this place you can get special food as the theme of the Arabian village is Arabian food. So with that, Mr. Mijil and the crew go on to the next destination, named Yaman Kuliner. From the explanation of Mr. Stanley, there are a lot of kinds of Arabian cuisine, such as maryam bread, sambosa, and kabsa rice. 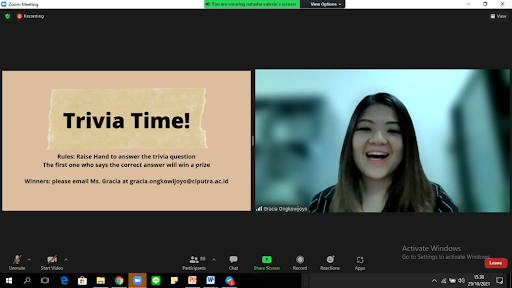 The quiz session led by Ms.Gracia contained three questions and was scored by raise of hand

Lastly, Mr. Mijil shows the food that has already been ordered on site. He also goes to the kitchen and shows how to make this delicious food. Located at KH.Mas Mansyur Street, Ampel Surabaya, this restaurant was famous for the deliciousness of its food. So, this place becomes the closing of a long virtual tour that day. On this occasion, Mr. Stanley gives advice to people that tolerance is needed and has been for many years. It was emphasized by Mr. Mijil that this diversity is rich in culture, religion, and history as assets to building a country. With this statement, the virtual tour was ended by them, to be continued by Ms. Gracia with a trivia quiz. Based on this event, students are expected to be grateful for everything that has now been achieved and try to keep it sustainable until posterity can still enjoy it and remember to keep tolerance in community life.

About the Author: Michelle Chandra