At the beginning of October, one of the programs held by NNP (Networking and Partnership) Ciputra University called UCIC, held an insightful event for UC students on the theme of “Study Abroad Experience: What They Say About Study Abroad”. Almost 85 participants from all majors joined this event with enthusiasm. A relaxing opening by Felicia Yohana and Natasha Valerie at 13.30 WIB makes this talk show not look too rigid. Continuing from Mrs. Suryani Halim’s short greetings, Head of NNP UC, she hopes that this talk show will be based on student footing to get the international opportunities in study.

Not only that, This special event was supported by Gracia Ongkowijoyo S.E., M.Sc. as the Head of the UCIC program for a better future for UC students. This special talk show involved two alumni of Ciputra University in the force year 2017, Timotius Einstein Tansil and Timotius Tjahjadi. These students were extraordinary and lucky people who can get the opportunity to join the student exchange in Korea. At this event, they give so much insight about studying abroad and how to reach it from the preparation of a test until they can be accepted there alternately, starting from Nicholas. 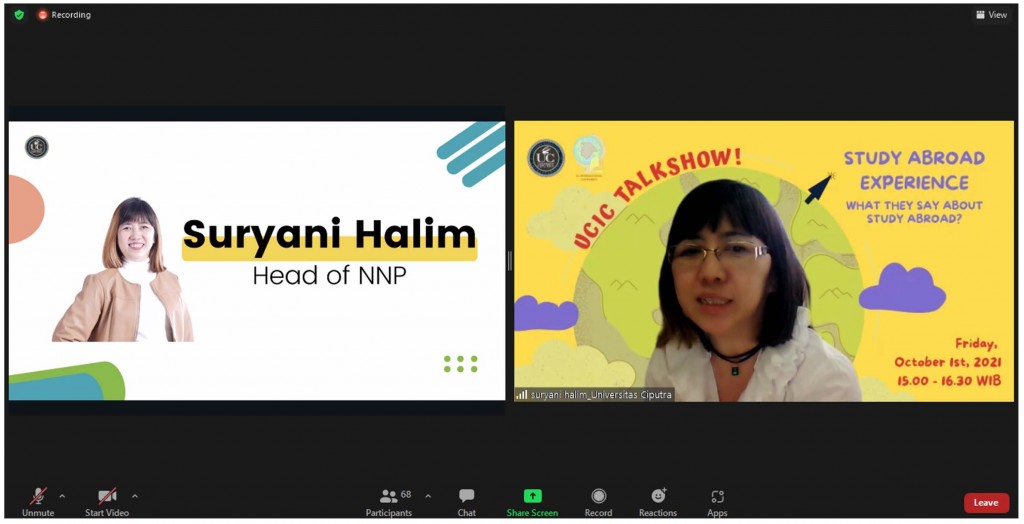 Portrait of opening by Head of NNP, Suryani Halim with the greetings of student enthusiasm of joining UCIC Talkshow in the theme of “Study Abroad Experience: What They Say About Study Abroad”.

“I am overjoyed and grateful for the opportunity to study at Solbridge University in Korea,” Nicholas said.He tells us about his history of getting that surprising gift in the semester of 5. Due to information from Ms. Suryani, the vice president of NNP, and her staff, Ms. Putri no longer has information about the campus that opened the international program at that time. He tells us about his studies in Daejeon, which start at 9 am and can easily be done by bus that goes directly to the campus. This 22-year-old boy was getting 50% off his pay while studying there outside the dorm facility. He says that everyone who can get this opportunity will get more than they expected. In his opinion, there will be 6 points that can be obtained from studying abroad. They see the world, sharpen language and communication skills, ethics in cultures and customs, create new networking connections, personal development, and life experience.

On the other hand, Timotius Tjahjadi, as a student exchange awardee at Dongseo University, Busan 2019, shares his experience of how to socialize inconvenience and obstacles during his studies there. Before I begin, I’d like to point out that the reason I was able to get there was due to my previous commitment, which pushed me to do so with the assistance of NNP,” Timotius explained.This alumna of IMT UC ’17 says that the program on student exchange gave him many friends and network experience and how to communicate with all people in the world. But, the obstacles it faces also depend on language, because it can’t be denied that the Korean language will be more interactive than English. Besides that, the differences in subjects and curriculum between Ciputra University and Dongseo University gave him a little bit of scoring to convert each subject to Indonesian credits.

After the talk show ended, it was replaced by the question and answer sessions that were filled with questions far from the session’s start. This interactive part surprisingly revealed both the two alumni’s experiences there. Start by learning how to adapt to the new culture and people. Also, the profit If you get a B score in Korea, it will be converted to an A in Indonesia’s credits. It depends on the composition of the scores in the Korean class, which is very competitive. 30% of people can get an A, 40% get a B, and 30% will get a C in every class. All you need to do is to try hard to push your scores on the TOEFL and IELTS because that will determine the scholarship you will get on this study exchange program, said Nicholas. Timotius also said that training public speaking skills and also studying the language of the country that you will be in is the best way to adapt to a new surface. 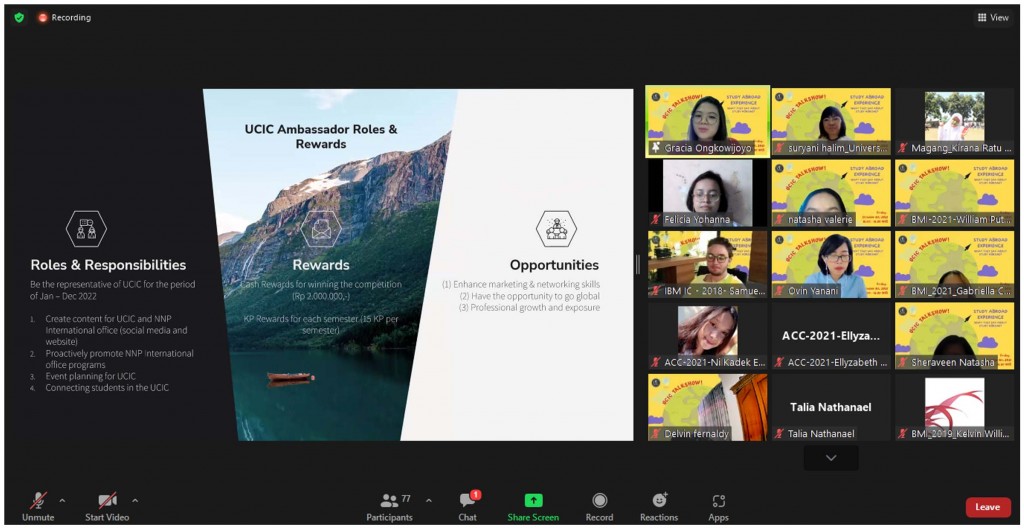 The snippet of first socialization of UCIC Ambassador Competition by the  Vice head of Networking and Partnership Department, Ms. Gracia Ongkowijoyo, S.E., M.Sc.

At the end of the event, the Master of Ceremony guides the participants to take a Kahoot quiz about this afternoon’s talkshow. This quiz, which runs for about 5 minutes, takes 3 winners to be appreciated for their precision from the start until the end of the event. Not only that, this talk show includes a campaign for the fresh international program in the name of “UC IC Ambassador Competition”. The competition that opened registration from now until the end of the year provides an opportunity for UC students to expand their network and experience, especially in an international program. What will you get? The selected ambassadors will get credit points and cash rewards in the amount of Rp 2.000.000,00. So what will you do? Get through your international experience now with NNP UC.